Welcome to a bit of original fiction, a brief story involving characters from the Bluestocking Belles’ holiday box set, Mistletoe, Marriage, and Mayhem. The hero of my story, A Dangerous Nativity, has gotten a message from Stephen Huntington, the Duke of Wyndale, hero of Nicole Zoltack’s story, Joy to the World. Go to Nicole’s Blog to read the message and learn about the duke’s dilemma and his plea to Chadbourn. This is the story of my hero’s response.

The Duke of Wyndale arrived at Eversham Hall after dark. The Earl of Chadbourn—plain Will Landrum if he had his way—had responded to a message from the duke, but did not expect him to arrive so soon. Eversham’s servants, driven by Stowe, the ever-proper butler, showed him to a hastily prepared guest room, almost over the guest’s objections. The duke must have left the moment Will’s response arrived and ridden all day. At least Eversham’s grooms were competent enough to handle a horse driven to exhaustion.

Will paced the drawing room in frustration, wondering once again whether he needed to pension off Stowe and several other members of his sister’s staff, one of a dozen matters that pressed in on him. At least the duke’s visit offered a distraction and, unless he missed his guess, some amusement.

A footman bowed and announced, “The Duke of Wyndale.”

The man looked remarkably well turned out for such short notice. Will gave a slight bow and a warm smile. “Welcome to Eversham Hall, Your Grace. My sister sends her apology for not welcoming you herself.”

“It is I who should apologize for intruding on the duchess’s mourning, Chadbourn. If it weren’t for the—“ he glanced at the footman’s avid expression and chose his words carefully “—business we discussed, I would never have presumed.” His pained expression made it clear he wanted privacy.

Before Will could respond, the doors to the dining room opened on well oiled hinges and Stowe, dressed in his most formal manner, announced dinner.

The manor’s cavernous dining room lay in darkness outside a circle of light formed by two silver candelabras. Will had asked for a quiet dinner in the library, but the horror in Stowe’s eyes disabused him of that error. The old butler could not countenance entertaining a visiting duke in any fashion but the most formal. 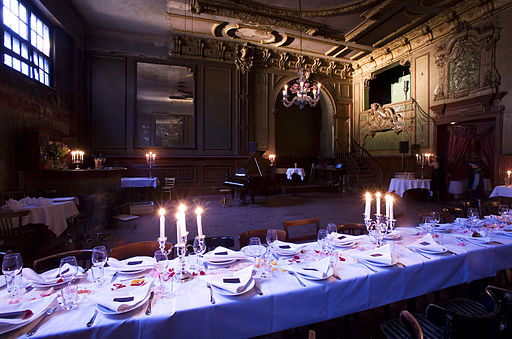 Will groaned inwardly and gestured to his guest. “Shall we talk over dinner?” Wyndale followed, frustration plain on his face.

The two men endured the attentions of a footman who served the first course and withdrew, taking the platter with them. The formality finally goaded Will to action. He gave the butler a pointed look and demanded that the food be left on the table. A ferocious scowl from the Stowe greeted his order to leave them alone, but all four servants bowed out. The quiet snap of the door, just a bit above the expected silence, signaled Stowe’s displeasure. Will turned to his guest.

“I am sorry, Your Grace. I thought our business would be best conducted discretely. I fear Stowe’s loyalty remains with my late brother-in-law and his consequence. He frowns on a mere earl, and an informal one at that. I hope you don’t mine serving yourself.”

The duke dismissed the thought with a wave of his hand. He wasted no time getting down to business. “I appreciate your discretion, Chadbourn. I came as soon as your message arrived, although I was baffled by your insistence I travel here myself. Do you have information about the scoundrel who has been impersonating me? And Wyndale, please. I loath all the “Your Grace” business.”

(Chadbourn, prepared to be amused)

Will sat back in his chair trying to decide where to start. “You know, of course, that this isn’t my home. I am not well acquainted with the local gentry.”

The duke nodded. “Glenaire said you have the unenviable job of dealing with the late duke’s estate on behalf of your nephew.”

“Yes. It keeps me generally tied to the Hall. My sister, of course does not entertain and she—“ Sylvia’s mental state is not this man’s business, he thought.

“Understandable,” the duke murmured, “but your swift response to my request indicated you have information.”

Will watched food disappear and wondered if Wyndale had stopped to eat on the way, deciding he had not. He placed another serving of beef on the duke’s plate. The man attacked his meal steadily, but his attention was entirely focused on his host.

“You were saying?” the duke prodded.

“Yes, well, I began to take long rides simply to shake off the gloom of this house. I recently made the acquaintance of some delightful neighbors. They in turn introduced me to Squire Archer. I went to him to discuss hiring his nephew John as steward here. The Squire turned out to be quite a raconteur, I might even say a gossip.”

“He heard something helpful?”

“You might say that. He took great delight in telling me that a duke had visited the area.”

“The Duke of Wyndale.” The duke dropped his fork and his expression soured.

“Precisely. Squire Archer considered it quite a coup for the county at large,” Will said with a rueful smile.

The duke let out an angry huff. “I think half of England has had the privilege.”

“Perhaps not so much as Suffolk,” Will said raising an eyebrow.

“The squire overflowed with good wishes for Miss Berkeley, the daughter of local baron—well liked, but a second daughter at that—who had captured the heart of a duke.”

“Captured his, his—“ the duke sputtered. “Don’t tell me she’s betrothed to the scoundrel!”

“I think, Wyndale, the girl actually believes herself betrothed to you. The county is all agog.” Will couldn’t keep the laughter from his voice.

“I assume you would know if you were.” Will grinned over his wine glass and raised it in salute. “Let me give you my congratulations now. Your wedding is in two days.”

Wyndale’s remaining appetite fled. He downed his wine in one gulp and reached for more.

What will become of poor Miss Berkeley? Will Wyndale stop the imposter? Will the earl overcome the gloom at Eversham Hall on time for Christmas, and perhaps find love in the process? You will want to read  Mistletoe, Marriage, and Mayhem to find out.

See Nicole’s blog for the beginning of this story and learn about the duke’s horrid imposter and his plea to Chadbourn.

And please join us for our Mistletoe, Marriage, and Mayhem Launch Party on November 1

3 thoughts on “Two Dukes and an Earl”

This site uses Akismet to reduce spam. Learn how your comment data is processed.